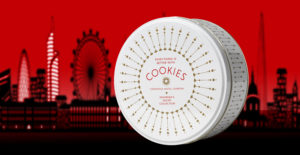 P Wilkinson Containers and William Say are proud to be shortlisted in the metal’s category of the UK Packaging Awards 2019 for their Corinthia Hotel ‘Grandma’s Recipe’ Cookies pack.

Everything about this project was London based – the cookies were baked and filled at the London hotel and each tin was manufactured just a stone’s throw away from its final retail destination at our Bermondsey-based factory.

Corinthia Hotel London was looking for an iconic pack for its homemade cookies which are baked at its premises at Whitehall Place in Westminster. The hotel has a long heritage in the capital, formerly the Metropole Hotel, it was used by Ministry of Defence to house staff during both world wars and the building was often depicted as MI6 HQ in the Daily Express James Bond comic strip.

The hotel wanted to make sure that each pack of ‘Grandma’s Recipe’ Cookies oozed quality and would bring back special memories for guests of their stay.

This limited edition slip lid tin was manufactured by William Say from tinplate using solar energy and its bottom was hand-embossed with the ‘Metal Recycles Forever’ logo – a constant reminder to customers that metal is a permanently available material, one that can be recycled again and again with no loss of quality. That is, if this tin ever makes it that far, most will be treasured as keepsakes of a trip to London.

William Say was able to produce a limited run of this tin, only 1000 were made, a dramatically shorter run than normal for the metal packaging industry. The red and gold details stand out brilliantly against the white substrate, creating a truly outstanding pack.